Using eval to get statistics for a gene set

The eval program from Michael Brent's lab is very useful for getting summary statistics and accuracy statistics for a gene set. It is described in a paper in BMC Bioinformatics in 2003. The paper says that eval can be run via a GUI or the command-line.

The paper describes these features of eval:
(i) It can produce histograms of a particular variable (eg. the number of exons per predicted gene), and can also categorise exons or genes by their length or GC content and shows the accuracy (eg. exon sensitivity) for each category.
(ii) eval can also compare multiple gene prediction sets for a genome, for example, by building clustering of genes or exons that share some property (eg. are identical, or overlap), and then present the result as Venn diagrams.
(iii) eval can also be used to select sets of genes that match another set by certain criteria, such as exact match, genomic overlap, one or more introns match, one or more exons match, start codon match, etc.

The eval software and documentation are available for download from the Brent lab webpage. The current version is 2.2.8 (as of September 2013). The description of the command-line interface for eval starts on page 27 (section 2.4) of the documentation pdf.

Validating your gtf file: validate_gtf.pl
You can check whether your gtf file is valid by using the validate_gtf.pl script:
% perl -I ~tk6/softwares/eval-2.2.8 ~tk6/softwares/eval-2.2.8/validate_gtf.pl my.gtf > my.gtf_validation
This picks up problems with the file, such as features whose start position is after their stop position, CDS features that are after the stop codon in a transcript, transcripts with inconsistent phase values for the different CDS features, and so on.

Accuracy statistics: eval.pl and evaluate_gtf.pl
If you have an independent set of curated genes for your species (which you think are 100% or nearly 100% correct), you can also use eval to give you specificity and sensitivity statistics for your gene prediction set.

For example, say your training set of gene predictions is in a file called training.gff, and it has the sequences of the scaffolds at the end of the gff file, after a line saying '##FASTA'. And say you have a gene prediction set in a file called predictions.gff (also with the sequences of scaffolds at its end), you can run eval by first making gtfs for eval:
% /software/pathogen/external/apps/usr/local/maker-2.28/bin/maker2eval_gtf training.gff > training.gtf
% /software/pathogen/external/apps/usr/local/maker-2.28/bin/maker2eval_gtf predictions.gff > predictions.gtf 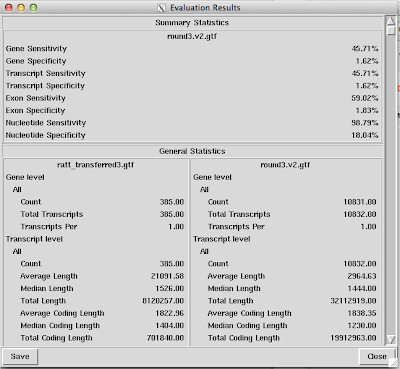 Note: [6-Oct-2015]: My colleague Diogo Ribeiro has noticed that there is a problem with Eval using a reference gene set to calculate sensitivity/specificity of a new gene set. The problem is that Eval does not take into account the scaffold/contig/chromosome where the feature is present, therefore matching CDSs/exons/transcripts/nucleotides that have the same coordinates even though on different scaffolds. Thanks Diogo for pointing this out! [Note to self: Diogo has a script thePythonEval.py that will calculate these statistics accurately.
16-Oct-2015: see further comment below]

Making graphs: graph_gtf.pl
This takes a graph file, an annotation gtf, a prediction gtf file, and makes some graphs. The eval documentation describes this further.

Finding overlaps between gene sets: get_overlap_stats.pl
This takes one or more sets of gtf files, and builds overlap clusters from them. See the eval documentation for more details.

Getting distributions for variables: get_distribution.pl
This will make histograms of different variables for you. See the eval documentation.

Thanks
Thanks to Eleanor Stanley for showing me how to use eval.

Comment 16-Oct-2015:
I've just looked again at the Eval documentation, and noticed it says:
"Although the GTF specification does not state that all genes in a gtf file must be from the same sequence or in the same coordinate system, this is a requirement for using the Eval software. Any GTF file used by any of the programs or lib raries described below must contain annotation of a single sequence with a ll genes in the same coordinate system (that of the sequence they annotate)."

That is, Eval can only work on a gtf file that has just one scaffold. So Eval might not actually have a bug, we just didn't realise we had to run it this way. (I imagine lots of people make that mistake!)

For Eval's evaluate_gtf.pl (calculating accuracy of a gene set), I think this means that we would need to make separate 'reference' and 'prediction' gtf files for each scaffold, and run evaluate_gtf.pl on each scaffold separately, then write our own script to integrate the results.

For Eval's get_general_stats.pl (calculating stats such as number of exons, length of intergenic DNA), it might not such a big difference, but I remember that Eval did seem to give some strange numbers for things such as amount of intergenic DNA and this might mean that we would need to use a separate gtf file for each scaffold.

Note to self 11-Oct-2018:
Diogo Ribeiro who was in our group wrote a Python version of eval that could run on an input file with lots of scaffolds, it was called thePythonEval. It also calculated a nice measure called 'amino acid sensitivity/specificy'. There is information on this here: http://mediawiki.internal.sanger.ac.uk/wiki/index.php/Helminth_Assembly_Support#thePythonEval.py_.28Compare_two_annotation_GFFs.29
Note however that Diogo's thePythonEval doesn't calculate gene level sensitivity/specificity according to the standard definition (e.g. see Burset & Guigo 1996, BursetGuigo1996_GeneEval.pdf) because thePythonEval considers a gene prediction to be a true positive if has all the exons in the true gene correct, with correct coordinates, even though the gene prediction includes extra (false positive) exons.