The DESeq 2010 paper by Anders & Huber
I've just presented the DESeq paper (Anders & Huber 2010) as a journal club paper, and have put my slides on slideshare in case they're of interest to anyone.

The main points of the paper are:

- A Poisson model underestimates the variance in RNA-seq read counts for a gene between biological samples, and this leads to false positives if you are using a Poisson model to detect differentially expressed genes.

- A Negative Binomial distribution is much better, especially for highly expressed genes, where a Poisson greatly underestimates the true variance.

- DESeq and EdgeR both use the Negative Binomial distribution to model the number of RNA-seq read counts for a gene.

- However, there are a couple of key differences between DESeq and EdgeR:
(i) DESeq estimates the sequencing depth for a library differently than EdgeR
(ii) DESeq estimates the variance in read count for a gene by assuming that it will have similar variance to genes of similar expression level (it uses a local regression of genes' variance versus expression, to estimate the variance)
[Note: my colleagues tell me that recent versions of EdgeR and DESeq seem to have changed however, and may do things more similarly nowadays.]

Running DESeq
My colleague Anna Protasio suggested that a good way to learn DESeq is to work through the R vignette, available here.

Here are the basic steps, using the example in the vignette:

The pasillaCountTable data frame has the genes as rows and samples (including biological replicates, but with each set of technical replicates merged into one) as columns. The values are raw read counts.

Note: you can view the pasilla_gene_counts.tsv file here.

5) Estimate the variances of the expression levels values for each gene, across all samples:
The variance of a gene is estimated as the sum of two components: the uncertainty in measuring a concentration by counting reads ("shot noise") plus the variation between biological replicates for a condition (called the "dispersion" in the DESeq vignette), as given in Equation 3 in the DESeq paper.

To estimate the dispersion values for genes, we type:
> cds = estimateDispersions( cds )
The vignette explains that the 'estimateDispersions' function carries out three steps:
(i) it estimates the dispersion value for each gene: w_i across all the biological replicates for all conditions (using Equation 7 in the DESeq paper),
(ii) it fits a curve through these estimates, ie. fits a regression line between w_i for genes and the mean (across all biological replicates for all conditions) normalised expression level for the genes (q_i; see equation 6 in the DESeq paper). The vignette points out that in the paper a local regression was used, but by default the latest software version uses a parametric fit instead.
(iii) it assigns the gene a dispersion value. The vignette says that w_i is used if it is greater than the fitted value from the regression, and otherwise the fitted value from the regression is used. The vignette explains that this change has been made since the paper was published, to take into account that some genes seem to have much higher dispersion than others.
The paper says that Equation 8 is used, which subtracts a value z_i from the fitted value.  I'm not sure if the z_i values are still used in the calculation, the vignette doesn't make this clear. (?)

As a QC step, we can plot the per-gene dispersion estimates (w_i) against the mean normalised counts per gene (q_i), and overlay the fitted curve:
> plotDispEsts( cds ) 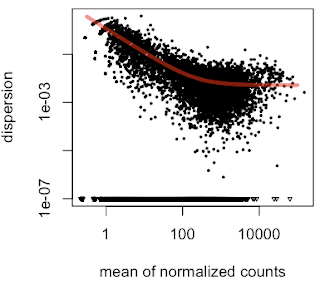 We can plot log2FoldChange against baseMean, with genes that are significant at a 10% false discovery rate (FDR) coloured red:
> plotMA(res) 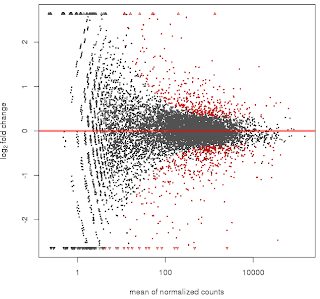 This MA plot has what is called a 'sting-ray' shape by some of my colleagues. There are more genes of higher expression level that are called as differentially expressed, compared to genes of low expression level.

The DESeq vignette also recommends to have a look at a histogram of the p-values:
> hist(res$pval, breaks=100, col="skyblue", border="slateblue", main="") 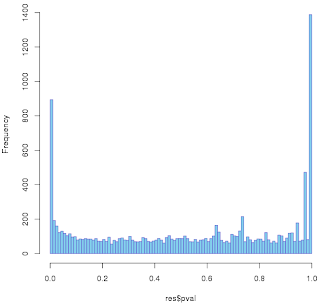 To save the output to a file, we can type:
> write.csv( res, file="My Pasilla Analysis Result Table.csv" ) 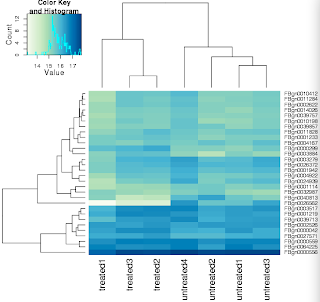 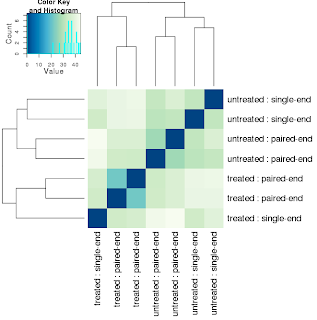 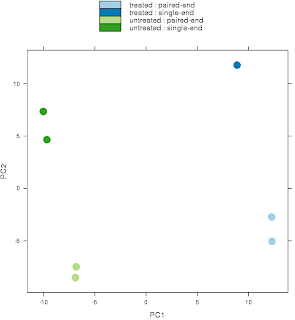 8) Other topics
The DESeq vignette also covers other topics such as:
- what to do if you have multiple factors (eg. condition such as 'treated' and 'untreated', library type such as 'paired-end' and 'single-end', etc.)
- 'independent filtering' (ie. filtering out those tests from the procedure that have no, or little chance of showing significant evidence, without even looking at their test statistic) based on the overall sum of counts (independent of biological condition)
- how to perform a variance stabilising transformation (as described also in the DESeq paper), for example, if you are intending to perform a cluster analysis of the data or to plot the data.

Thanks to my colleagues in the Parasite Genomics Team for very interesting discussion about this.
Posted by Avril Coghlan at 08:36