I am learning to use the CRISPResso software for analysing CRISPR-Cas9 data, which was published by Pinello et al (2016). The supporting information for that paper contains a lovely user guide for the software.

CRISPR-Cas9
I am new to CRISPR-Cas9, so here is a summary to remind me!

The two key parts of this system are:
- the Cas9 enzyme, which cuts double-stranded DNA at a specific location.
- a guide RNA (gRNA), which is about 20 bp, and is located within a longer RNA scaffold. The scaffold binds to DNA and pre-designed gRNA guides Cas9 (Cas9 binds to the gRNA) to the right part of the genome. The gRNA has bases complementary to the target DNA sequence in the genome.

1. Quality filtering
This allows the user to try to avoid false positives due to sequencing errors. CRISPResso allows reads to be filtered based (i) on a read's 'average quality score', defined as the average of the read's single-base quality scores, (ii) on the lowest base quality for all bases in a read. By default, the reads are not filtered.


2. Trimming
If the user provides the adaptor sequences used, this will trim them using Trimmomatic. By default, the reads are not trimmed.

3. Merging paired end reads
When paired end reads are used, it is possible to merge the reads since the amplicon sequence is usually shorter than twice the read length. This step mean that the sequence for the overlapping region is obtained with greater confidence. This step is performed using FLASH.

4. Alignment
To align the filtered reads to the reference amplicon, CRISPResso uses needle from the EMBOSS package, which performs Needleman-Wunsch alignment.

5. Quantification of mutation
HDR events: The sequence identity scores for alignment to the reference amplicon and expected HDR amplicon (if any) are considered. If the read aligns better to the expected HDR amplicon, the read is classified as HDR or mixed HDR-NHEJ. If the sequence identity is above 98%, the read is classified as HDR, otherwise as mixed HDR-NHEJ.
Unmodified versus NHEJ: Reads that align better to the reference amplicon than expected HDR amplicon are considered unmodified if they have 100% sequence identity with it. Otherwise, they are classified as NHEJ if they contain mutations in a window of w bp (w/2 bp on each side) about the gRNA's cleavage site.
Output plots: For all plots, all mutations on reads with a given classification are shown by default, even the ones outside the w bp window in the case of NHEJ that do not contribute to the classification.

Note that if there are deletion and substitutions in a read that are at the end of the reference amplicon,  CRISPResso may ignore these (for quantification and in the Alleles_frequency_table.txt output file). This is because by default CRISPResso excludes 15bp from each side of the reads for quantification of indels, and only considers an indel if it overlaps the window around the cleavage site (ie. the window of size w). The value of 15 bp can be changed by the -exclude_bp_from_left and --exclude_bp_from_right options.

Other optional inputs:
1. One or more gRNA sequences can be provided to compare the predicted cleavage position(s) to the position of the observed mutations.
2. For HDR quantification, the expected amplicon sequence after HDR must also be provided.

A simple job to run CRISPresso:
% /nfs/team87/farm3_lims2_vms/software/python_local/bin/CRISPResso -w 50 --hide_mutations_outside_window_NHEJ -o S1_expA -r1 Homo-sapiens_S1_L001_R1_001.fastq -a GAAAGTCCGGAAAGACAAGGAAGgaacacctccacttacaaaagaagataagacagttgtcagacaaagccctcgaaggattaagccagttaggattattccttcttcaaaaaggacagatgcaaccattgctaagcaactcttacagag -g CTCGAAGGATTAAGCCAGTT
where
/nfs/team87/farm3_lims2_vms/software/python_local/bin/CRISPResso is where CRISPResso is installed,
-w specifies the window(s) in bp around each sgRNA to quantify the indels. The window is centred on the predicted cleavage site specified by each sgRNA. By default this is 1 bp on the CRISPresso website,
--hide_mutations_outside_window_NHEJ allows the user to visualise only the mutations overlapping the window around the cleavage site and used to classify a read as NHEJ. By default this is set to False, and all mutations are visualised including those that do not overlap the window, even though they are not used to classify a read as NHEJ.
-o S1_expA specifies the output folder to use for the analysis (by default this is the current folder),
-r1 Homo-sapiens_S1_L001_R1_001.fastq specifies the first fastq file,
-a GAAAGTCCGGAAAGACAAGGAAGgaacacctccacttacaaaagaagataagacagttgtcagacaaagccctcgaaggattaagccagttaggattattccttcttcaaaaaggacagatgcaaccattgctaagcaactcttacagag specifies the amplicon sequence,
-g  CTCGAAGGATTAAGCCAGTT specifies the sgRNA sequence. If more than one sequence is entered, they can be separated by commas.

Output files:
CRISPResso_RUNNING_LOG.txt
This gives the information on the CRISPresso run.


Note: by default, this file only includes substitutions within the window of size w, and deletions that overlap that window of size w and indels that are at least 15 bp from the end of the reference amplicon.

cut_points.pickle
I think this is just a temporary file produced by the program (???).

effect_vector_deletion_NHEJ.txt
According to the supporting information for the paper, this gives the location of deletions.

effect_vector_insertion_NHEJ.txt
According to the supporting information for the paper, this gives the location of insertions.

effect_vector_substitution_NHEJ.txt
According to the supporting information for the paper, this gives the location of substitutions.

indel_histogram.txt
The supporting information for the paper says it is the data used to generate figure 1 in the output report.

insertion_histogram.txt
The supporting information for the paper says it is the data used to generate the deletion histogram in figure 3 in the output report.

Mapping_statistics.txt
This seems to have the mapping information for a particular sample, eg.
READS IN INPUTS:135418
READS AFTER PREPROCESSING:117968
READS ALIGNED:53182
Note that in our case we had several different experiments (gRNA and amplicon combinations) sequenced in the same sequencing sample, so only some of the reads aligned (here 53182) to one of the amplicons.
The CRISPResso github page says the 'READS AFTER PREPROCESSING' is the number of reads left after merging reads (from paired-end read-pairs) and/or filtering based on base quality.

position_dependent_vector_avg_insertion_size.txt
The supporting information for the paper says it has the average length of the insertions for each position.

sgRNA_intervals.pickle
I think this is just a temporary file produced by the program (???).


Figures:
1a.Indel_size_distribution_n_sequences.pdf
This is a histogram, which looks something like this: 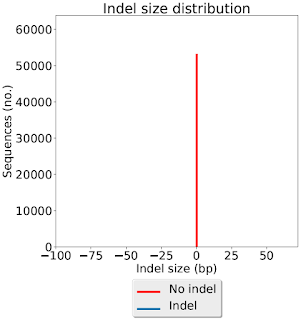 1b.Indel_size_distribution_percentage.pdf
This is another histogram, which shows the y-axis as the % of sequences with a certain indel size, rather than the number of sequences (as in 1a above). It looks like this: 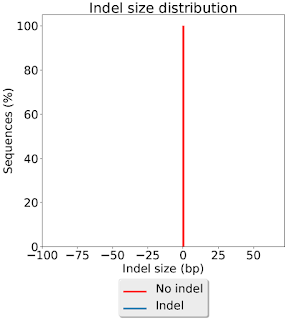 2.Unmodified_NHEJ_pie_chart.pdf
This is a pie chart, which shows the %reads with a modification (insertion, or deletion, or substitution): 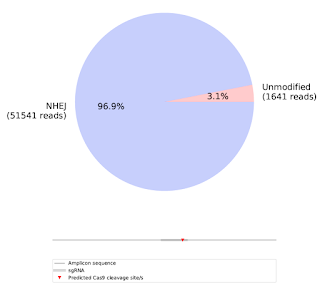 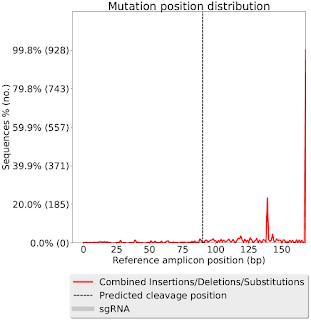 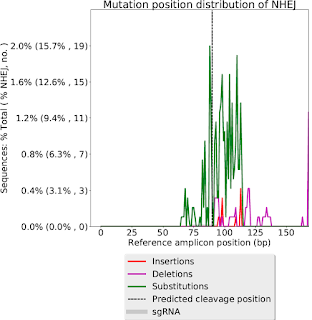 Note: this picture does not seem to just include indels that overlap the window of size w around the Cas9 cut site. However, I think that this plot is excluding indels that occur in the last 15 bp of the reference amplicon.