I wanted to figure out how to run Python in a Jupyter notebook, which is like the newer version of iPython notebooks. I found quite a nice tutorial on getting started on Python Jupyter notebooks here.

The first step is to install Jupyter.
(Note to self: I found it is installed on the pcs5 at Sanger, so I can start it up by 'ssh -Y pcs5', and then..)

The second step is to start up a Jupyter notebook session:
(Note to self: I did this in /nfs/users/nfs_a/alc/Documents/git/Python)
% jupyter notebook
(Note to self: jupyter is installed with python2 software on the Sanger farm, so seems to assume Python2.)
This opens up a web browser showing the files in the directory where I started jupyter.
You can then start a new notebook by going to the 'New' menu on the right, and choosing 'python2'.

You can give your notebook a title by typing in the 'Untitled' box at the top, for example, you could rename it 'plotting_chrs', and then it would be saved as file plotting_chrs.ipynb
Then you can start typing in the prompt line.
To get a line to be executed, you can press Shift+Return.

Here I made a jupiter notebook to make a SVG plot of chromosomes (see my previous blogpost), and display the SVG inline: 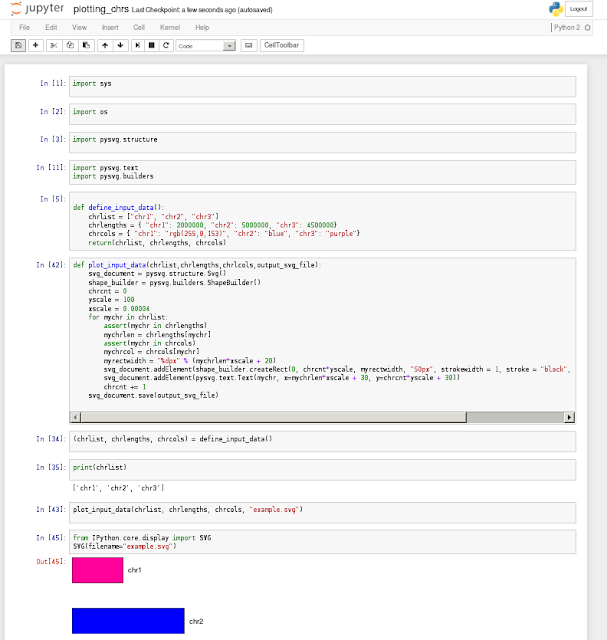 (Note to self: the whole of the svg image from pysvg doesn't seem to be displayed inline, I'm not sure why this is - I tried another svg and it worked fine.)

To shut down the notebook, you can click on 'Close and Halt' in the File menu. To start again you can type
% jupyter notebook plotting_chrs.ipynb
to open this notebook again.