The sequence data at Sanger is run through the QC Grind v3 pipeline, which gives various plots that give you an idea about the quality of the sequence. 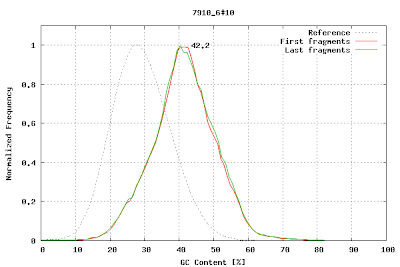 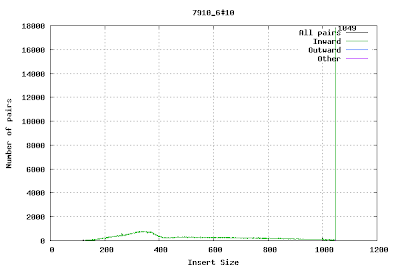 Plot of base qualities versus sequencing cycle
This shows that there were 100 cycles of sequencing carried out for the forward reads, and 100 cycles for the reverse reads. At each cycle (height in the plot) it gives the number of bases sequenced that have a particular base quality. Base quality is along the x-axis. The number of bases is shown using a colour scale, which is given in the key on the right, where black is the lowest quality, then blue, then green, then red is high quality and white is the highest quality.
In this example, it seems that the base quality was slightly lower in the first 10 cycles (about quality 30), and then stayed at about 35-38 for all of the cycles until it goes down a little again near the last cycle. The same pattern is seen for the forward and reverse reads. I guess what would be worrying would be if the base quality changed a lot during the cycles. 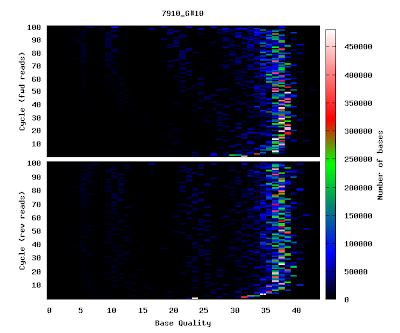 Plot of base counts versus sequencing cycle
This plot shows the number of bases of each type (A, red; C, black; G, green; T, blue) sequenced during each sequencing cycle (out of 100 sequencing cycles, in this case). In this example, there are slightly more As and Ts sequenced than Gs and Cs, at each point. 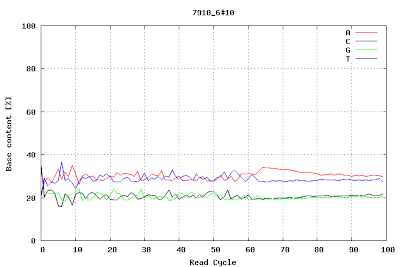 Histogram of read qualities for forward and reverse reads
This plot has a histogram of qualities for forward and reverse reads. I think the lines represent different sequencing cycles, so the red line is cycle 1, the next line is cycle 2, and so on up to cycle 100, as we had 100 sequencing cycles in this example [is this right?] I'm not sure if this is average base qualities in reads, or mapping quality of reads (?). I think it must be base qualities. 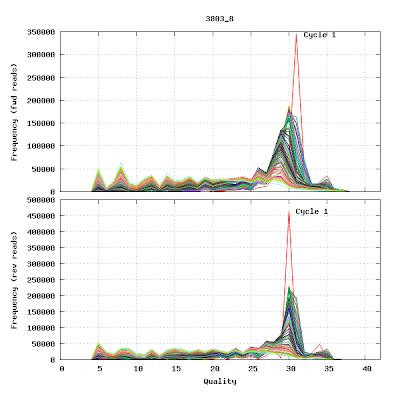 Plot of read quality versus sequencing cycle, for forward and reverse reads
This plot shows the median (black line)), mean (red or green line) and interquartile range (grey area) of the qualities for forward and reverse reads (y-axes), versus the sequencing cycle (x-axis). I'm not sure if this is average base qualities in reads, or mapping quality of reads (?). I think it must be base qualities.
We see that for the forward reads, the quality is low for the first ten cycles, then increases, and then decreases again slightly for the last 10-15 cycles. This is also seen for the reverse reads. 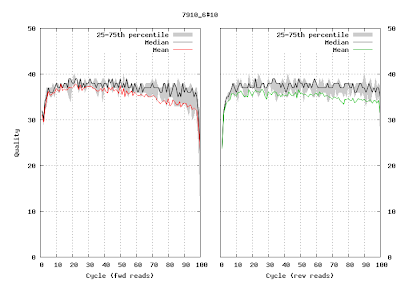 Here's one that looks pretty bad, it looks like the quality went down a lot during the sequencing cycles: 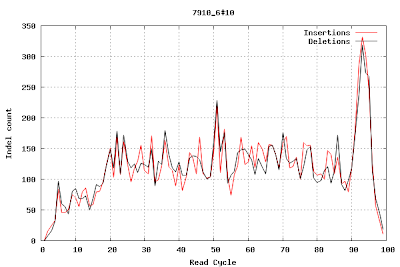 Plot of log(indels) versus indel length:
This plot shows the log of the number of indels seen, versus the length of the indels in base-pairs, for insertions (red line), deletions (black line) and insertions plus deletions (green line). We see that there is not much difference in the pattern for insertions compared to deletions. For both, there are mostly smaller indels seen, and few large indels of >20 bp. 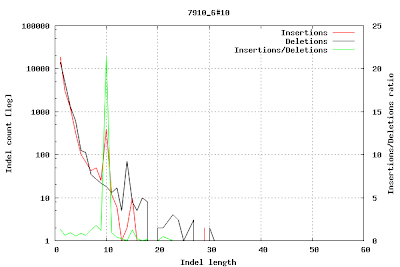 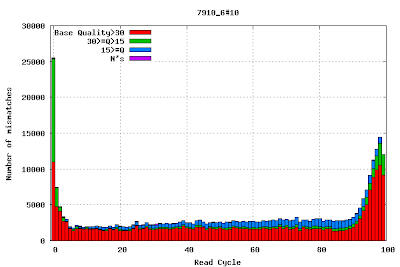 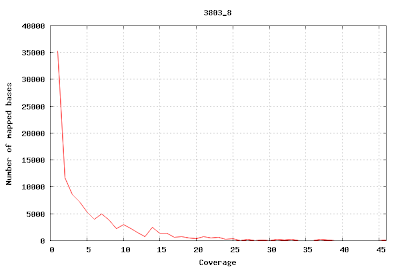 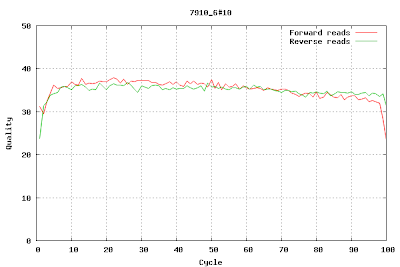 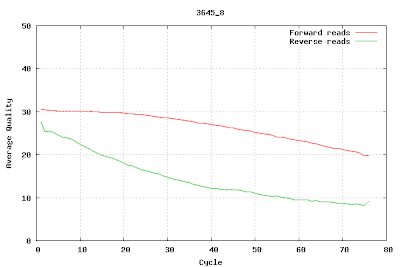 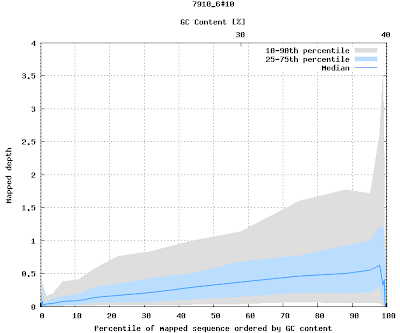 Posted by Avril Coghlan at 01:55 No comments:

The MACS software can be used to identify peaks in ChIP-Seq data. It can also be used for other similar data such as FAIRE-Seq data, although it was designed for ChIP-Seq data.

Output files
An output file is made called test-ChIP_peaks.bed that has the positions of peaks identified.
Posted by Avril Coghlan at 08:01 No comments:

This is of interest to Sanger users only.

Another thing to know about farm_blast is that by default it splits up large sequences into chunks of 500000 bp. You can change the chunk size using the --split_bases option.

Running blast yourself
You can run blast yourself by typing:
% makeblastdb -in mydb.fa -input_type fasta -dbtype prot
This formats a protein fasta file mydb.fa as the blast database.
Then run blast:
% blastp -query myquery.fa -db mydb.fa -task blastp -outfmt 6 -seg yes
This runs blastp between myquery.fa and database mydb.fa.
If you want SEG to be run, include '-seg yes' (the default is no SEG filtering).

Now the rest of this blog (below) is obsolete, so I've changed it to pale grey.

Posted by Avril Coghlan at 07:34 No comments:

This is only of interest to Sanger users, as it's only available on the Sanger farm. The path-dev group (Jacquilline Keane's team) have made a script called annotate_bacteria for annotation of bacterial genomes. It is based on PROKKA and is tailored for bacteria, archaea and viruses. It works by taking an assembly as input and identifying ORFs with Prodigal, and predicting RNA genes using RNAmmer and Aragorn.

It then predicts the functions of ORFs, by running BLAST against a database of proteins from RefSeq and UniProt (by default these are bacterial, archaeal and viral proteins), and comparing to domain databases (PfamA, CDD), and also runs SignalP to predict signal peptides. It gives evidence codes on the description lines to give the sources of the functional annotations.

Notes:
- This runs fine on farm3, but not on farm2.
- Prodigal does not seem to predict partial genes (lacking a start and/or stop codon).
- Contigs in your input assembly.fa that are <200 bp are discarded.
- The RNA gene prediction step takes a long time.
- If you want to run a particular version of interproscan, you can do this with the -e option, eg. -e /software/pathogen/external/apps/usr/local/iprscan-5.0.7/interproscan.sh
Posted by Avril Coghlan at 06:14 No comments:

As discussed on Noel O'Blog's website, you can merge pdfs with the program pdftk.

This makes one output pdf, MolBiolCellCh1_1_figs.pdf, that has the three other pdfs merged together in order.

Posted by Avril Coghlan at 04:40 No comments:

Running a perl script with a particular version of Perl

Then you need to run the perl script with the correct version of perl for it to work:
% /software/perl-5.10.1/bin/perl -w my.pl
Hello

Note that if you don't use the correct version of perl, you'll get an error message:
% perl -w my.pl
Perl v5.10.0 required--this is only v5.8.8, stopped at my.pl line 3.
BEGIN failed--compilation aborted at my.pl line 3.

Note also that if you don't include the "use 5.010" in your script, it won't enable new features specific to 5.010 by default, and you'll get an error message because the 'say' command won't be recognised:

Perl - getting a list of files in the current directory

To get a list of the names of files in a directory in Perl, you can use the glob function. This is what the book Effective Perl Programming suggests:

Here it is necessary to use 'defined', in case the name of the file is '0' (zero), which would appear to be false in the while loop, and cause the loop to terminate early.
Posted by Avril Coghlan at 01:42 No comments: