I recently wrote a blog post on using the WormBase ParaSite REST API to retrieve data from their database. For C. elegans data, it's best to use the main WormBase website, and there is also a WormBase REST API.

My problem today was to retrieve phenotype information (from RNAi, mutants) for C. elegans genes. Ages ago, I wrote a blog post doing this by querying the WormBase website through their standard webpage. But, let's modernise and use the REST API instead!

I found that it's possible to do a REST API query to get the phenotypes for a gene, by typing for example:
http://rest.wormbase.org/rest/field/gene/WBGene00000079/phenotype
for gene WBGene00000079.

Python script to retrieve references for a gene

Here is a little script to retrieve the references (e.g. papers) for a gene:
import requests, sys

Retrieving the gene name for a gene

You can retrieve the gene name for a gene by using the REST API e.g. http://rest.wormbase.org/rest/field/gene/WBGene00000079/name .

Posted by Avril Coghlan at 04:58 No comments:

I recently wrote a blogpost on using the ChEMBL REST API to retrieve compounds with bioactivities for particular targets, as well as compound information (structure, logP etc.) for those compounds, from the ChEMBL database.

What about retrieving information on which (ChEMBL) targets are predicted for a particular ChEMBL compound? If you look at the ChEMBL page for a compound (e.g. imatinib),  at the bottom of the page you can see a 'Target predictions' section, containing predicted protein targets in ChEMBL. These are based on the prediction approach described here and here. These predictions give a good first approximation of whether there is a predicted binding between a compound and a ChEMBL target.

Simple REST API queries through the ChEMBL website
It turns out this is easy to retrieve this target prediction info. using the ChEMBL REST API (just for compounds and targets already in ChEMBL). For example, to get target predictions for imatinib, we can type into a web browser:
https://www.ebi.ac.uk/chembl/api/data/target_prediction.json?molecule_chembl_id=CHEMBL941&limit=100
and we should see: 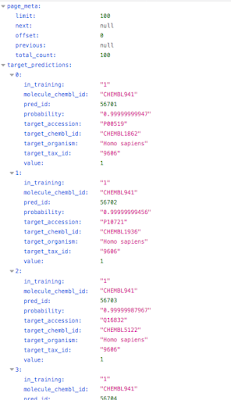 The fields shown here are:

Simple REST API queries using Python
I wrote a Python script to retrieve all the predicted targets from ChEMBL, for an input list of ChEMBL compounds. You can see it here.

Acknowledgements
Thank you to Fiona Hunter and Nicolas Bosc from ChEMBL for advice about the ChEMBL target prediction REST API!
Posted by Avril Coghlan at 04:44 No comments:

The TRANSFAC database contains experimentally determined transcription factor binding sites, and is a rich source of information for those interested in promoters and gene regulation.

1. Once you log in, you can then click on 'Search the TRANSFAC Public database', and on the search page you can choose to search in the 'Factor' table, and then you can choose search term 'muscle', and select 'Cell specificity (positive)' in the 'Table field to search in' menu:

(I can't show the MyoD entry here as it's copyright info, but make yourself a free account and you can view it too!)

Posted by Avril Coghlan at 00:40 No comments:

In a previous post, I wrote about retrieving data from WormBase ParaSite using their REST API.

When you look at the gene tree in WormBase ParaSite, it looks like this:

Posted by Avril Coghlan at 05:04 No comments:

I wanted to cluster some chemical compounds (which I had stored in SMILES format), and had read about the free cheminformatics software DataWarrior, so decided to give it a try!

After downloading and installing DataWarrior on my Mac, I had a read through the DataWarrior user manual. 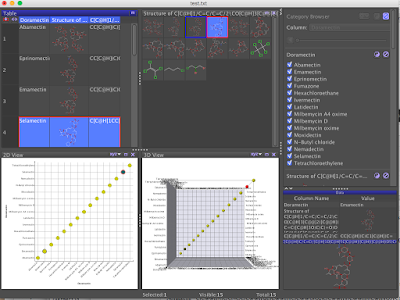 Clustering compounds
I next wanted to cluster my compounds by similarity. To do this, I selected all my compounds in the table at the 'Table' window (see top left) in DataWarrior, and then chose 'Cluster compounds/reactions' in the 'Chemistry' menu.

This didn't produce any plot, but I noticed that two extra columns had been added to the 'Table' window, 'Cluster No' and 'Is Representative', saying what is the cluster number for each compound, and whether it is a good representative for the cluster.

Similarity analysis
Another type of analysis you can perform in DataWarrior is a 'similarity analysis'. To do this, I went to 'Chemistry'->'Analyse similarity/activity cliffs'. This brought up a new window called a 'Similarity chart', which shows my molecules, with similar compounds connected by a line. Also, when you click on the dot representing a compound, other molecules that are similar are coloured according to their level of similarity.

For example, if I click on 'ivermectin', I see the dot representing ivermectin becomes dark green, and other compounds that are similar are now coloured green:

In another nice example, I see a trio of compounds that are coloured green at the bottom (with lines between them), but another greenish compound somewhere on the left which is not joined by a line but is somewhat similar: 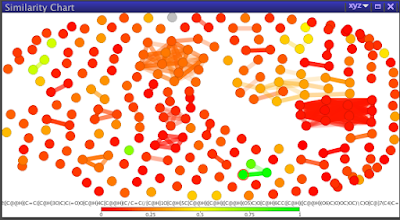 Note that if you move your mouse over a dot (compound) in the 'Similarity chart' window, the compound will appear in the window at the bottom left of the screen: 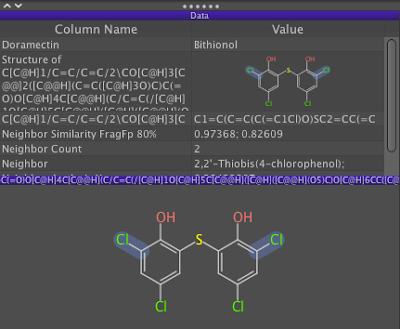 Note that it's also possible to hover over, or click on, a compound in the 'Table' of compounds at the top left of DataWarrior, and that compound will be highlighted in the 'Similarity chart' window, e.g.
for euphorbol:

Note that if you want to export the connected components found by DataWarrior in this Similarity Analysis, you can go to File->Save special, and choose 'Textfile', and for each compound the text file has its number of neighbours, and the node numbers for the neighbours in the Similarity Analysis plot. You can then use that information to figure out the members of each connected component.

Posted by Avril Coghlan at 01:54 No comments: