Note that if you want to convince yourself that var.test() does the same thing as my 'pf' lines above, you can peak at the var.test() code using:
> methods(var.test)
[1] var.test.default* var.test.formula*
see '?methods' for accessing help and source code
This tells us that there is a function var.test.default, let's look at it:
> getAnywhere(var.test.default)
A single object matching ‘var.test.default’ was found
It was found in the following places
registered S3 method for var.test from namespace stats
namespace:stats
with value

You can see that in this code they are using the pf function to get the p-value:
PVAL <- pf(STATISTIC, DF.x, DF.y)

Posted by Avril Coghlan at 08:28 No comments:

Are you sick of bugs? Me too!
An easy way to search down bugs is to test your Python code using doctests.
For example, if you have a module like this called 'module.py':

# define a function to read GO terms from a line of a file:


This module has just one function 'read_go_terms_from_line_of_file' that reads the name of a gene family, and GO terms for the genes in that family, from an input file. The function takes as its input the line of a file, and returns the name of the family (a string) and a list of the GO terms. At the top of the function (in red above) are some doctests, which define what the function should return (according to the programmer) for particular example inputs. The end of the module has some code (in pink above) that says that if we run this module, by typing:
% python3 module.py
then the doctests are run. If you get no output when you run 'python3 module.py', then it means that the doctests were run, and all ran fine, and no bugs were found (hurray!) If you do get some output, then it helps you find those nasty bugs, and you can hunt them down and squash them (hurray!)

To get more detailed output regarding which tests were run and which failed/passed, type:
% python3 module.py -v

Then, to run the doctests we just run the program with the "-m doctest" option:
% python -m doctest program.py

I've just started learning about ETE2 for parsing and plotting phylogenetic trees in Python, on recommendation from my colleague Diogo Ribeiro (thanks Diogo!)

ETE2 is currently in Python2, but apparently a Python3 version is coming soon (I hope so!)

For example, here's a simple script to read in a tree, and traverse all the nodes in a tree, and for each node print its children, its parent, and all the leaves under (decendants to) the node:

# the code below is based on examples on http://pythonhosted.org/ete2/tutorial/tutorial_trees.html
# load a tree from a file. The root node is put into 't'
t = Tree(newick_file, format=1) # format=1 means internal node names are loaded

# iterate over all the nodes in the tree, and get the children of each node:
for node in t.traverse("postorder"):
# get the children of this node:
children = node.get_children()
for child in children:
print "node %s has child %s" % (node.name, child.name)

# iterate over all the nodes in the tree, and get the parent of each node:
for node in t.traverse("postorder"):
# get the parent of this node:
if not node.is_root(): # if it is not the root node
print "node %s has parent %s" % (node.name, node.up.name)

# iterate over all the nodes in the tree, and get the ancestor nodes of each node, back
# to the root:
for node in t.traverse("postorder"):
# get the ancestors of this node:
if not node.is_root():
ancestor = node.up
ancestors = [ancestor]
while not ancestor.is_root():
ancestor = ancestor.up
ancestors.append(ancestor)
ancestor_names = [ancestor.name for ancestor in ancestors]
print "node %s has ancestors %s" % (node.name, ','.join(ancestor_names))

List comprehensions are a really nice feature of Python. For example, say you have a list 'leaves' of objects, and each object in the list has an attribute 'name' (a string). To print out a comma-separated string of all the names of all the objects in the list, we just type:

You have a dictionary 'mydict' of lists, get those lists and flatten them into one big list:
The values (not keys) of 'mydict' are lists.

Making a quick plot of a phylogenetic tree

I've been trying to find nice ways to make a quick plot of a phylogenetic tree.

Here are some nice ones:
- My colleague Bhavana told me about using FigTree [note to self: this is installed on the Sanger farm]
- On the ETE2 webpage, there is a very nice TreeView tool for drawing a tree, where you can just paste in  your tree, and it makes a tree picture
- On the Sanger farm, if you logged in using 'ssh -X', you can use the ETE2 command-line tool, by typing 'ete2' with a Newick tree file name, and a GUI pops up
- You can also plot a tree using a Python script that calls ETE2, for example, this script calls ETE2 and pops up a picture of the tree in a GUI (picture below): (again, for this you need to log into the Sanger farm using 'ssh -X')

# the code below is based on examples on http://pythonhosted.org/ete2/tutorial/tutorial_drawing.html
# load a tree from a file. The root node is put into 't'
t = Tree(newick_file, format=1) # format=1 means internal node names are loaded
t.show() 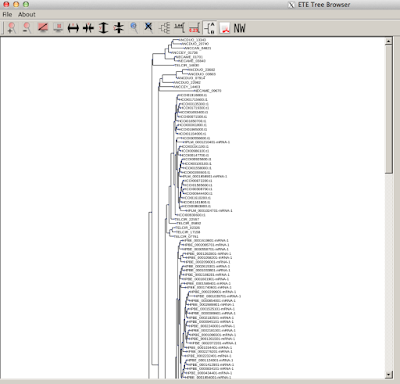 Other tools:
- My colleague Diogo also mentioned a new tool called PhyloCanvas, which he said is very fast.

I wanted to test whether any GO terms are enriched in my gene list compared to all genes in the genome, so decided to try topGO, since my colleagues recommend it.

There are two methods described in the Alexa et al (2006) paper:
(i) 'elim' : this method processes the GO terms by traversing the GO hierarchy from bottom to top, ie. it first assesses the most specific (bottom-most) GO terms, and proceeds later to more general (higher) GO terms. When it assesses a higher (more general) GO term, it discards any genes that are annotated with significantly enriched descendant GO terms (considered significant using a pre-defined P-value threshold). This method does tend to miss some true positives at higher (more general) levels of the GO hierarchy.
(ii) 'weight': this is designed to miss less true positives than the 'elim' method. The significance scores of connected nodes (a parent and its child in the GO hierarchy) are compared in order to detect the locally most significant terms in the GO hierarchy.

The current TopGO actually has four more methods:
(iii) 'classic': each GO term is tested independently, not taking the GO hierarchy into account.
(iv) 'weight01': this is the default method used by TopGO, and is a mixture of the 'elim' and 'weight' methods.
(v) 'lea': this doesn't seem to be described in the TopGO vignette or any paper, so I'm not sure what it does (?)
(vi) 'parentchild': described by Grossman et al (2007) : when assessing a GO term, it takes into accoount the annotation of terms to the current term's parents, and so reduces false positives due to the inheritance problem. You can also use this algorithm in a very nice tool called Ontologizer , which has a lovely GUI (I used it in a collaboration on gene duplicates with Shane Woods, described in his paper Woods et al (2013)).

How to run TopGO
The vignette described in detail how to use the package, but here's a summary of what I did (so I won't forget!):

Starting topGO
Once you have installed topGO you can start it by typing:
> library("topGO")

GO hierarchy
The GO hierarchy used by topGO is the one that comes with the GO.db package. Therefore the user does not need to provide this.

Putting the data together into an R object
We need to put our data in an object of type 'topGOdata'. This will contain the list of genes of interest, the GO annotations, and the GO hierarchy itself.
> myGOdata <- new("topGOdata", description="My project", ontology="BP", allGenes=geneList,  annot = annFUN.gene2GO, gene2GO = geneID2GO)
The 'ontology' argument can be 'BP' (biological process), 'MF' (molecular function), or 'CC' (cellular component).
The 'description' argument has a short description of your project.
The 'allGenes' argument specifies all the genes in the 'gene universe', and which of those are  your genes of interest.
The 'annot' argument tells topGO how to map genes to GO annotations. 'annot'=annFUN.gene2GO means that the user provides gene-to-GO annotations, and we specify here that they are in object 'geneID2GO' (see above for how this was created).
An optional argument is 'nodeSize': this is used to prune the GO hierarchy, eg. nodesize=10 prunes the GO hierarchy, to remove terms which have less than 10 annotated genes.

TopGO generally only seems to use a subset of my 'gene universe' data, which it considers 'feasible'. I think this is because you may have some genes in your input 'gene universe' that don't have any GO terms annotated to them. Also, you might have some terms in the GO annotations for your gene universe that don't exist in the version of the GO hierarchy that TopGO uses (which comes from the GO.db R package). Unfortunately this means that TopGO actually only uses some of your input data, and throws some away. Note that also, you may have chosen to use 'BP' (biological process) terms but many of your input annotations may be molecular function (MF) or cellular component (CC) terms.


Performing enrichment tests
One type of test that topGO does is a Fisher's exact test based on gene counts:
> resultFisher <- runTest(myGOdata, algorithm="classic", statistic="fisher")
Selecting 'algorithm=classic' means that the GO hierarchy isn't taken into account, so each GO term is tested independently. (Usually in fact we want to take the GO hierarchy into account, so would use algorithm='weight01' for example.)
You can type 'resultFisher' to get a summary of the results:
Description: My project
Ontology: BP
'classic' algorithm with the 'fisher' test
15 GO terms scored: 0 terms with p < 0.01
Annotation data:
Annotated genes: 2
Significant genes: 1
Min. no. of genes annotated to a GO: 1
Nontrivial nodes: 1
The p-values have not been corrected for multiple testing.

We can visualise the position of the statistically significant GO terms in the GO hierarchy by using the following functions:
> showSigOfNodes(myGOdata, score(resultFisher), firstSigNodes = 5, useInfo ='all')
> printGraph(myGOdata, resultFisher, firstSigNodes = 5, fn.prefix = "tGO", useInfo = "all", pdfSW = TRUE)
The second command makes a pdf file ("tGO_classic_5_all.pdf") with the picture. The significant GO terms are shown as rectangles in the picture. The most significant terms are coloured red and least significant in yellow: 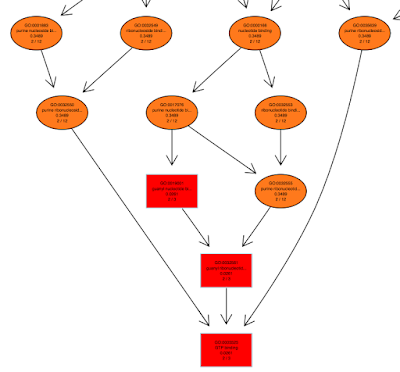