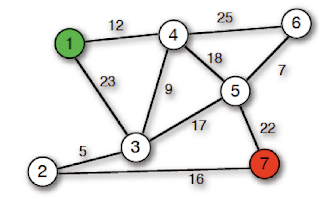 Note: the Dijkstra's algorithm finds the shortest path, and requires that you don't have any negative edge weights.

A directed graph
The next thing that I wanted to do was to find the highest-scoring path (longest path) through the following directed graph: 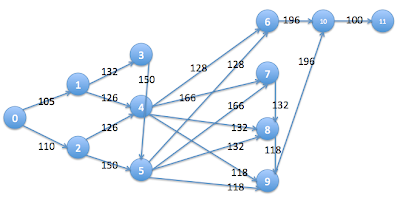 In this case the edges are directed. Apparently in numpy, to specify a directed graph, when you specify the matrix of edges, you only specify one of the edges between nodes i and j.

A key difference between this case and the previous one is that here I wanted the highest-scoring path, so actually this is the 'longest path problem'. Unfortunately, Dijkstra's algorithm can't be used for this. However, my husband Noel helped me find another algorithm to find the longest path in a weighted graph, see his blog post on this (thanks Noel!).

Posted by Avril Coghlan at 04:38 No comments: